Genetic testing is the best way to confirm a diagnosis in a patient with signs or symptoms suggestive of a genetic disease. It refers to the analysis of the gene itself, and it identifies the specific disease causing the mutation. Genetic testing can also predict a person’s risk of developing a disease. The diagnosis of Spinal Muscular Atrophy(SMA) begins after the sudden or gradual onset of specific symptoms. During the physical examination, the physician will obtain a complete medical history of the patient, and he/she may also ask if there is a family history of any medical problems. If the clinical examination points towards SMA, then genetic diagnosis is done. We at MDCRC have been offering genetic diagnosis for the past 6 years. All our methods/techniques are as per International Best Practice Guidelines. At MDCRC, only invasive procedures are carried out. A volume of 3-5 ml of blood in EDTA(purple cap) tubes is required labeled with appropriate details. DNA is extracted from these tubes and is used for subsequent genetic testing.

Detection Of Homozygous Deletion Of SMN1

The first step is the SMN1 gene deletion test. Polymerase Chain Reaction-Restriction Fragment Length Polymorphism is the most commonly used qualitative method for the deletion detection. Two homologue copies of the SMN gene are playing a central role in SMA: SMN1 and SMN2 which are identical except mutations in exons 7 & 8. The deletions in SMN1 exon 7 are of functional relevance to the disease, while the deletions in SMN2 only correlate with severity. Somebody who lacks both functioning copies of SMN1 is always a patient, whereas SMA carriers with a single copy of the SMN1 gene are symptom-free. Approximately 95-98% of patients with the clinical diagnosis of SMA lack both copies(homozygous deletion) of SMN1 exon 7(and exon 8 in the majority of cases). Reports containing deletion information will be issued within 3-4 weeks from when the sample was received.

In only a minority of SMA patients(2-5%), there is an SMN1 deletion of exon 7 on one of their alleles and an intragenic point mutation of the SMN1 gene on the other allele. These patients are called compound heterozygous, Point mutations may be dispersed all over the SMN1 gene. Non-quantitative methods such as PCR-RFLP do not detect the copy number of the gene and hence cannot be used for detection of compound heterozygotes that have point mutations. For cases which are negative from PCR-RFLP, a quantitative technique is used to confirm whether the person has a heterozygous or a homozygous deletion. Multiplex Ligation Probe Amplification(MLPA) is the most commonly used method for the remaining 2-5%. If the deletion is heterozygous, it is taken for sequencing to detect point mutations. Results from MLPA analysis and sequencing for diagnostics are available for research purposes only. MLPA can also be used to detect the copy number of the SMN2 gene which correlates with the severity of the disease. Reports containing information from MLPA and sequence analysis will be issued within 3- 4 months from when the sample was received.

Respiratory muscles are progressively compromised in children with DMD, the expiratory muscles being the most commonly affected. Even short periods of physical inactivity can contribute to muscle weakness and reduced respiratory capacity. There is evidence that breathing exercises can improve respiratory function in patients with DMD.

Regular stretching is of enormous benefit for children with Duchenne muscular dystrophy. Performing a daily stretching routine is the most effective way to prevent loss of flexibility. When done correctly, it can prevent muscle contractures and deformities and ultimately improve physical ability and prolong independence.

This technique helps to free a body part from the resistance of friction while it is moving the part. It is suspended in a sling attached to a rope that is fix to an appropriate point above the body segment This is applicable in cases in which the patient not able to do the movement actively.

Can do passively, actively and actively with assistance This helps to increase blood circulation, maintain joint range of motion and also prevent developing muscle tightness and thereby prevent contracture.

The recognition of abnormal postures is important as they ultimately interfere with activities of daily living, function and quality of life. The assessment and management of posture is thus one of the most important aspects of the medical and rehabilitative care of these patients. First aim is to diagnosis of postural defect, then start giving proper stretching and strengthening exercises as early as possible which helps to prevent further postural defects.

IFT, Ultrasound, Electrical Stimulation, FIR are some of the equipment used for treatment. It mainly helps in:

Exercising with a Group is motivating. It will even spark some friendly competition. It can be fun also.

Play therapy is a form of therapy primarily geared toward children. In this form of therapy, a therapist encourages a child to explore life events that may have an effect on current circumstances, in a manner and pace of the child’s choosing, primarily through play but also through language.

In the rehabilitation centre in Coimbatore, regular yoga sessions are being taught by a trained Yoga teacher, who is imparting this wonderful knowledge to the benefit of the children and families. Apart from regular physiotherapy, ‘Yoga’ is also imparted with the rehab management. Mainly because, yoga and its benefits are holistic and it addresses the respiratory health in an extra ordinary way. Pranayama, Kapalapathi and Bhastrika are very helpful to maintain good lung function.

We believe yoga will contribute towards good breathing practices and help in improvement of basic gait and respiratory function. We have specially planned exercises and yoga sessions for parents and children to enable them to cope better. Children are evaluated on a regular basis for their consistent effort and their performance is recorded.

We have started Virtual Reality in rehabilitation. With the growing accessibility of computer-assisted technology, one option for rehabilitation programs for individuals with Duchenne muscular dystrophy (DMD) is the use of virtual reality environments to enhance motor practice. There is a need to support individuals with Duchenne Muscular Dystrophy (DMD) to achieve optimal functionality in everyday life and with meaningful tasks and activities, throughout stages of the disease progression. Thus, technological developments have created an exciting opportunity for the use of affordable virtual reality (VR) systems with different kinds of interaction devices, providing an efficient and fun tool for enabling improvement in motor performance.

Training was offered to the professionals (Community Health Nurses, Teaching professionals, Officials in Differently abled welfare organization, Integrated Child development Scheme), who serve as a liaison between the community and the health fraternity. This in turn creates an integrated network to cater to the children and families afflicted by this condition. We have trained over 15,000 people to identify the children with Duchenne in both rural & urban across the state. By this collaborative effort we could raise awareness on the existing government schemes amidst to the families.

Training was provided to the public Health workers through out the state. Nearly 10,000 health workers were trained to identify the children with the symptoms in rural & Urban. 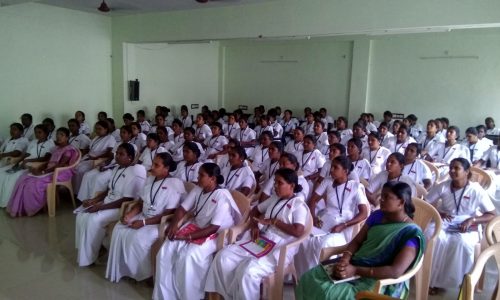 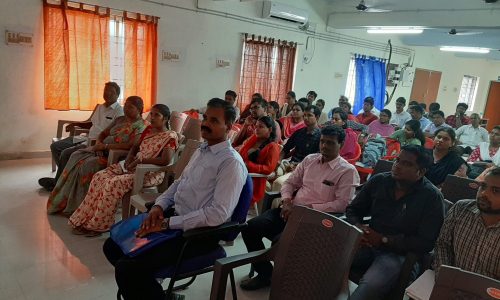 Integrated Child Development Scheme official (Anganwadi Teachers) were trained for early identification of symptoms as they are well equipped to cater to the children below 5 years. 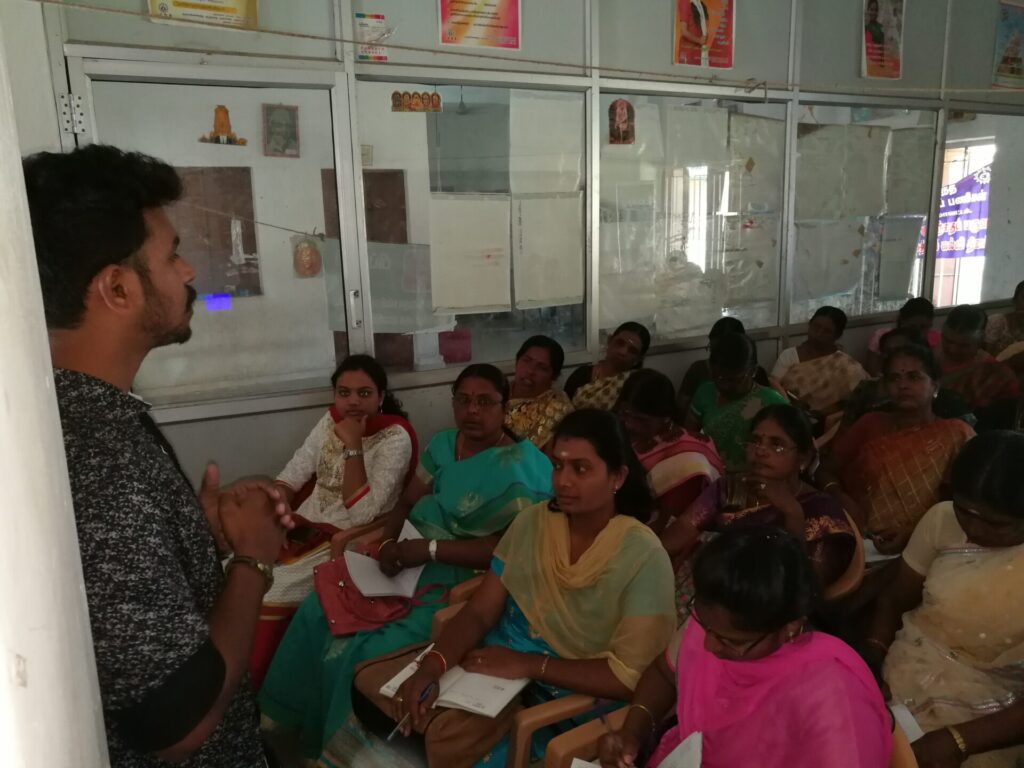 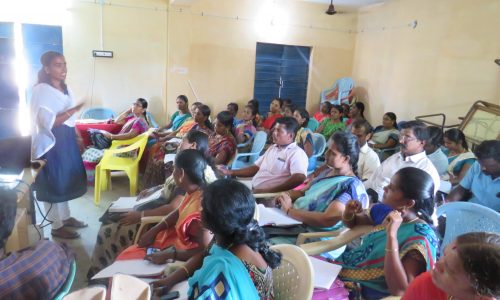 Special Educators play an important role in government schools to train and educate children with special abilities we did not miss this opportunity to collaborate with them and conduct camps in school premises.

Screening camps were conducted in each & every district of the state. We had conducted more than 3000 children were screened to identify the kids with symptoms 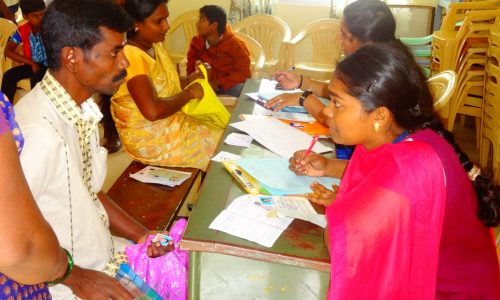 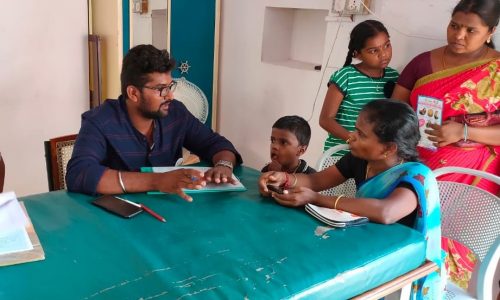 Our Community Outreach workers have reached at the door steps of more than 1000 houses to screen the children with symptoms of DMD who otherwise had no means to reach the hospital or camp sites. 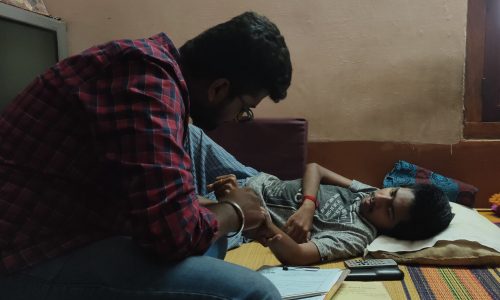 Information , Education, Communication (IEC Activities like Rally, Marathons, Holding plug cards in traffic signals and newspapers to create awareness among the public to bring about an inclusive society and equity. 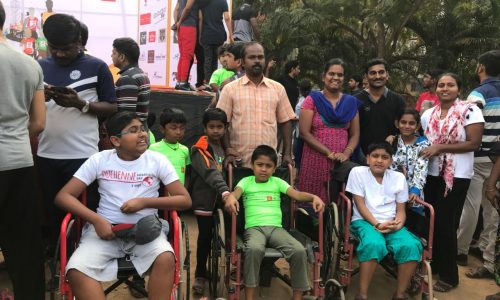 We have more than 500 volunteers across the state to help us the families in the respective districts. Networking is going on yet to strengthen the volunteer group. 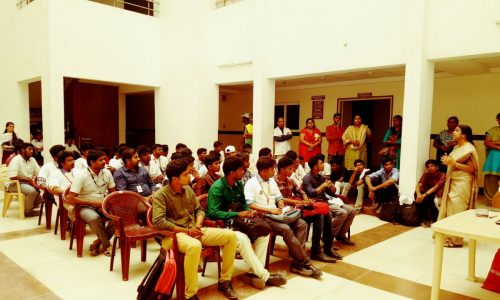 Rehabilitation services are offered on a regular basis for the children affected with Duchenne Muscular Dystrophy who are residing in and around Coimbatore and Tirupur. The children are brought to the Rehabilitation centre in MDCRC from their door steps in a customized van with a ramp that is wheel chair accessible. 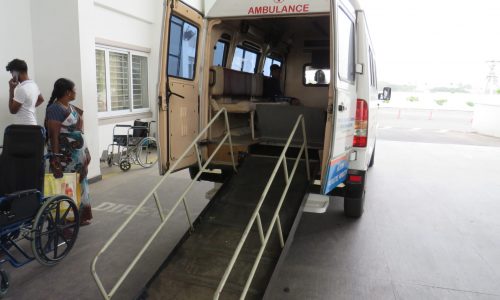 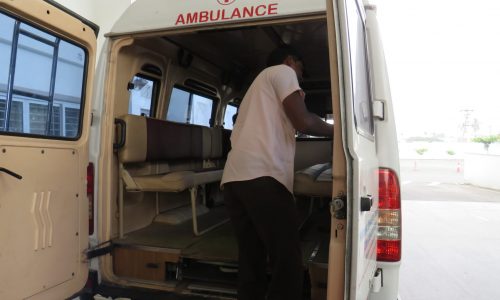 Prenatal genetic counsellor works with individuals, couples, or families who are more likely to have a child with a birth defect or genetic condition. This helps in early stage of pregnancy to identify genetic abnormalities. People who are currently pregnant or planning having a child in the future should consult with a prenatal genetic counsellor to learn more about the condition in question, to better understand its complications, and to explore options for prenatal screening, testing and/or assisted reproductive techniques. They will make the family understand the clinical information, what to expect and how to prepare for the birth of the child with special needs and discuss abortion or adoption options as well.

Group counselling is a form of counselling where a small group of individuals gather to discuss, interact, and explore an issue, helping to gain mutual support and motivation. The key idea behind this is, struggling with specific issues may lead to isolation, and a feeling that you are alone in dealing with your problem. Enhancing emotional expressiveness, group counselling attempts to lessen this social isolation by assembling people with similar issues to enforce that difficulties are not singular to one person. Additionally, knowing other people with similar problems may be soothing for an individual, who may not have access in their own family and friends to people with the same problem.

Individual counselling is a one-on-one counselling between the family and a trained Genetic counsellor, in a safe, compassionate, and confidential atmosphere. During the session, the genetic counsellor gains more details from the family by making them comfortable enough to share their feelings. By doing so, the family is able to identify those aspects of their lives that they would like to enhance. Thus, it encourages them to have a clear insight of themselves and others. By gaining the insight they will realize what’s troubling them and what they actually want in life.

Due to COVID19, tele-genetics services made genetic counselling feasible via internet, it provides consultations faster through both telephonic and video call. Tele-consultation saves time by helping families in this pandemic get consultations without travelling long distances. Also this technique is a quicker way to assist families with any emergency needs.

Psycho-social refers to both the individual’s psychological and social dimensions. This counselling is an activity in which the counsellor provides time, attention, respect that is required to discuss, find and describe ways of living more resourcefully. It enhances the individual’s mental and emotional health.